In his memoir, Born a Crime, South African comedian Trevor Noah told the story of an unexpected encounter he had in a jail cell. Arrested for driving an unregistered car from his stepfather’s mechanic shop, Trevor was very much out of place in the jail. He was trying to come across as the tough guy to his cellmates even as he debated which he feared more: the law, or his parents.

Then a huge man, the biggest man he’d ever seen, came in. Convinced this hulk of a human would crush him with the slightest provocation, Trevor steered clear—until he noticed the man struggling to communicate with one of the guards. South Africa has 11 official languages, and although most people speak more than one, language barriers are a normal part of life there. The hulk spoke a rarer tribal language that the guard did not understand. Since Trevor knew both languages, he stepped in to help translate.

Afterward, the hulk was overwhelmed with gratitude, and the two ended up talking, getting to know one another, and becoming the odd couple of the holding cell. What Trevor saw in that moment was that he had not just helped solve a logistical problem—he had made the man feel understood on a deeper level, valued and humanized in a moment of desperation.

I’ve been trying to apply that wisdom to a ministry my church is engaged in through World Relief, a refugee resettlement and anti-sex trafficking nonprofit. We’ve partnered with them to walk alongside a refugee family as they make their home in the Triad. This relationship has been challenging and joyful in so many ways to me personally and to our team as a whole.

The Asumanis are a family of 7—two parents, plus five children ages 10, 8, 6, 4, and 6 months—who are Congolese but have been in a refugee camp in Tanzania since before the children were born. We’ve helped them get social services, healthcare, work, community connections, and more. More importantly, we’ve gotten to know and love them as friends and neighbors.

As they’ve adjusted to life in the States, one of the biggest priorities after meeting basic needs has been learning English. We’ve been pretty focused on getting them to ESL and tutoring them because we’re aware how big of a difference that will make. But I realized that I was letting the language barrier unduly impact my relationship with them. A staff member at World Relief suggested that we ask the family to teach us a little Swahili, remembering that they are not the only ones who have something to learn.

I began to think about how strange and lonely it must be for them to be struggling to learn this new (and very difficult) language in a totally new place and way of life. I remembered one time when we got them together with another Congolese family at a park, how they talked on and on in their native Swahili. It wasn’t just that they could be understood on a cognitive level—there was a joy there of being understood as who they were.

I downloaded a basic Swahili course and started learning a few phrases. Finally, I knew just enough—“Hello” (hujambo), “How are you” (habari gani), “Very good” (nzuri sana), “Thank you” (asante)—to attempt communication. The first time I engaged the mom in Swahili, she laughed and laughed—but she replied in Swahili, encouraged me when I got phrases right, and seemed not only amused but genuinely pleased.

I’ve begun to notice more how Swahili phrases our team members use help the kids connect and respond. Instead of just demanding that these people learn how to communicate with us, our team is working to communicate with them. They recognize that this learning is a two-way street, and many of our team members have intentionally picked up Swahili phrases or dug up their high school French (which the dad speaks) to ease the burden of comprehension. The effort isn’t just practical—it lets the family know that we care, that we value their culture, that all of us are both teachers and students.

I can’t help but remember the story of the descent of the Holy Spirit onto the disciples:

When Pentecost Day arrived, they were all together in one place. Suddenly a sound from heaven like the howling of a fierce wind filled the entire house where they were sitting. They saw what seemed to be individual flames of fire alighting on each one of them. They were all filled with the Holy Spirit and began to speak in other languages as the Spirit enabled them to speak. There were pious Jews from every nation under heaven living in Jerusalem. When they heard this sound, a crowd gathered. They were mystified because everyone heard them speaking in their native languages. They were surprised and amazed, saying, “Look, aren’t all the people who are speaking Galileans, every one of them? How then can each of us hear them speaking in our native language? (Acts 2:1-8)

When the Holy Spirit comes, she comes speaking in the native tongues of all the people present through people who do not speak those languages. God does not homogenize; God diversifies. This reminds me that faith is not just something that we take in cognitively; it’s something that must take root in our hearts, in the deepest parts of who we are. It reminds me that even as God calls us to draw near, God has already drawn near to us. 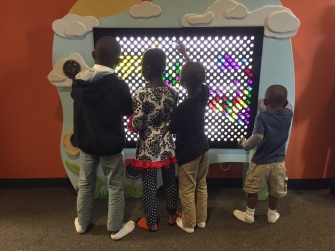 Getting to know these refugees has challenged me to move toward them and not just expect them to move toward me by becoming Americanized. And walking with this family has taught me that there are other languages that transcend linguistic difference and speak directly to the hearts of everyone involved. Play is one of them. One of our team members decided to take the four older kids to our local children’s museum—a fun, interactive space that did not require English. Brilliant. Many of our other team members have taken the kids on outings, included them in holiday gatherings, and found ways to help them get out of the house and have fun. Play is a universal language, whether that’s engaging one of the exhibits at the children’s museum, running and climbing at a playground, or horsing around in their living room.

These kids know that we love them, not because we tell them in any spoken language, but because we show them—by showing up, by being there, by letting them teach us, and most importantly, by hugging and playing and spending time with them.

It’s occurred to me that one day, this family will know enough English to talk more with us about their early experiences here in the States. I feel like I know so little about what they are thinking or feeling in response to all this newness, and I’m excited to one day be able to reflect with them and gain insight into these first months here. My hope is that, whatever misunderstandings we are creating in the meantime, we are clearly and loudly communicating love, care, and respect, spoken and unspoken, in every interaction we have. My hope is that we are speaking to the head and the heart, for they have spoken to both for me and for our team.

"I believe in kindness, also in mischief. Also in singing, especially when it is not necessarily prescribed." {Mary Oliver} View more posts